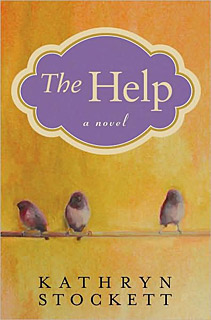 I'm reading this dynamic novel. It's the story of African- American Maids in Mississippi in the 60's. My mom sent me the book and I encountered countless people that were also reading it. I understood the attraction after page one.
Kathryn does a wonderful job of detailing a slice of that era. She takes the voices of the three protagonist and paints a vivid picture of their individual lives (and the white families they work for.) When I enjoy any creative piece, I want to know more about the artist. I was surprised to find that Kathryn was a 40- year old, white woman. This drew me in even more.
Unfortunately, not everyone felt the same admiration. In my research, I learned that Kathryn has been subjected to a lot of negative criticism for being a white woman telling this "black story". I was taken aback to read the harsh comments people made about her. Imagine the years she spent writing this, the hours of sitting in front of the computer and the creative identities she carefully designed. I thought about the blood, sweat and tears she put into each character, the relief she must have felt after almost 50 rejection letters, one publisher decided to give her manuscript a go. Then you read that she offended some people in the black community because she told a story from a black perspective... when she isn't.
Sometimes we hold ourselves back. One of the reasons I'm so enamoured with writing is because as a writer you get to be anything and anyone in the world. If you have a voice, and have done your research, you can tell a story from any perspective, including a dog or a flee or an Aborigine. How dare anyone damn her for doing so here!
I'm inspired that Kathryn was courageous enough to become the black voice of the 60's. I'm inspired by the fact that Kathryn was determined enough to receive rejection upon rejection and keep submitting. Talk about believing in yourself!
I'm not quite done with the book, it's getting juicer by the page. But I see why there's been such hype and concern. Another lesson: all great works of art are subjected to great criticism.
Do yourself a favor and read it!
Posted by Chameleon Moon at 6:43 AM