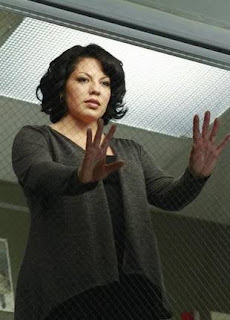 Okay, I had to watch it again and this episode ROCKED! I applaud the courage of series creator Shonda Rhimes and the entire cast for going with it. Again, Sara Ramirez killed the vocals. Her rendition of Snow Patrol's Chasing Cars was riveting.
I appreciate that the directors lead with this amazing voice (OK, soon, I'll get off my Sara kick...but not today) and her acting chops proved just why she's a Tony Award winner.
Along with Chasing Cars, there was a quick shot of all the doctors scrubbing in in unison which was also a highlight, Sara's version of Grace was a beautiful accompaniment.

The finale was also strong as Sara threw herself into "The Story" then woke up and agreed to marry Arizona. Just freaking great! And I'm a freakin romantic! Love it!
Posted by Chameleon Moon at 3:31 AM