Exit Through The Gift Shop 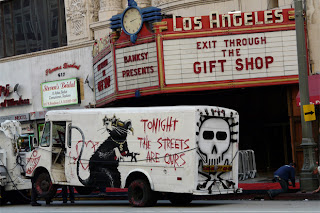 Mr. Brainwash and Banksy have been beaten up quite a bit over the past few months over this damn documentary. People call Mr. Brainwash a sell-out, they speculate if he is, in fact, Banksy himself and many "Posh" art critics don't consider his (or their) work as art because it is taken from the streets.

Personally, I love Banksy, have since discovering him in London. And while I do think Mr. Brainwash is a reproduction of both Banksy and Shepard Fairey, I can't help but ponder...what isn't? Afterall, wouldn't Banksy be the 21st century version of Jean- Michel Basquait?


In all mediums, music, television, cinema and the painted art, you find artist that imitate other artist. In most of these cases, they generate more press which equates to more money. This, is when people start complaining.


Money is truly the root of all evil. Money = Power and people are struggling for power in all areas of life. It's amazing to see how fear identifies itself in the form of power. Sad.


Street art is getting recognized in a way that it hasn't. It's evolution can be best compared to Rap music and how initially, there was a strong distaste for this form of expression. Until, it became cool.


I can't say if Mr. Brainwash is Banksy or just a high - level version of Banksy. But I've seen the film and it was pretty good. Most importantly, Banksy has the world talking and wondering "Who Is Banksy?" Very Machiavellian of him.


And that, my friends, is a genius form of art itself.
Posted by Chameleon Moon at 4:12 AM