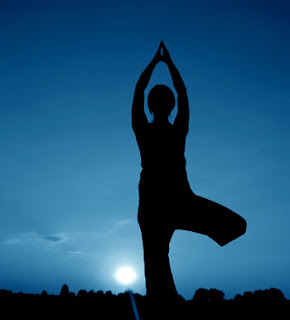 It is true what they say about the benefits of yoga: it does more for the spirit than any other workout. And I'm a runner as well as an avid spinner; yet an inflexible yogi. I praise this mind-body-spirit workout for the mental breakthroughs I receive as a result of it.
I've been practicing yoga in some form for 10 years. It started when I lived in Providence and began taking Hot- Yoga. I then moved to NY and discovered (and became addicted to) Bikram Yoga (the original Hot Yoga). When I moved to London I became enamoured with Ashtanga yoga- which is a high- intensity, almost cardio yoga. Admittedly, Ashtanga proved to be the most difficult for me because I move through my practise slower than this yoga demands. But I kept at it- twice per week.
I'd like to get to the point where I can take yoga 6 days a week. In fact, I would like yoga to be my primary workout, above both spinning and running. But I'm not interested in teaching it. I get such a wonderful benefit just by being a practitioner, I wouldn't want to lose that.
I've also promised to keep a commitment I made last year.
It is my goal to spend every day of my birthday month (July) practicing yoga. I challenged myself to do so last year and did yoga for 31 days and am not going to break that cycle...no way, no how!
The peace I get from yoga cannot be compared. I know when I haven't been practicing: I start doubting myself and oddly, thoughts drift to the dark-side more frequently. Yoga allows me to balance this and gently guide that sporadic ego.
So July 1st it is. Who's with me?

p.s my favorite yoga teacher to date is Adam at the Hollywood Y. That guy is transformative. If you are taking his class, better arrive early or you'll find yourself damn- near sharing a yoga mat with a stranger because- his class fills up pretty quickly.
Posted by Chameleon Moon at 11:15 PM

Email ThisBlogThis!Share to TwitterShare to FacebookShare to Pinterest
Labels: yoga