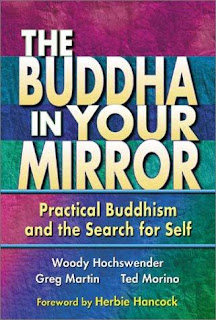 I found Buddhism the way some people find a penny on the street, organically. Actually, I should say Buddhism found me. However, it wasn't until recently that I responded to the call. (Seems to be a theme of mine.)

Herbie Hancock introduced me to this wonderful practice. Yes, the Musician. No, I don't know him. When I lived in NYC, between 2003 & 2006, I saw Herbie on an interview and the peace he exuded resonated through the screen. There was a general accepting of life and the interview was not Buddhism specific. Immediately, I became curious and Googled him. I came across an interview where he spoke of the effect Buddhism had on his life. The curious George that I am, I began researching everything about this philosophy.

The book, The Buddha In Your Mirror, was pivotal in helping me understand the reality that true happiness can be found within oneself, which is the basic principle of this discipline. Chanting the phrase Nam-Myoho-Renge-Kyo on a consistent basis will assist with uncovering your true happiness. Nam-Myoho-Renge-Kyo is translated as, Devotion To The Mystic Law Of Cause And Effect Through Sound.  When you practice Buddhism and chant, you are aligning your Karma and you begin to take responsibility for your thoughts and actions.

Some people experience this same result through prayer and/or meditation and I salute whatever discipline you pursue. For me, having grown up in a Christian environment and taught that God was outside of me, I always believed that there was more, and thus, this practice has actually saved me more than anything else I attempted (and there have been many).

Overtime and throughout my many moves, I lost the connection that I originally experienced with Nichiren Buddhism. Although I would occasionally chant when I lived in NY and London, I never took the time to digest it and become an active participant. Until recently...

A few months ago, I had what would be the biggest wake up call of my life. There I was, casually floating through life, allowing my ego to drive my actions and ruin some very important relationships only to slowly realize that not only was I a, "Yes Man", but I was lacking true self love. This was a disturbing truth as externally you could bet your last dollar that I loved me. I learned that I'm pretty good at masking. Even from myself.

After having meltdown upon meltdown, I slowly picked up my head and decided it was time to change.  I began praying and remembered Herbie and his peacefulness. Thus, I began chanting. I didn't know at the time that a close friend here in LA was considering Buddhism.

After a few days of chanting, I received an unsolicited call to attend her ceremony for she was ready to receive her Gohonzon (the Buddhist scroll that's placed in your home to which you chant). I attended and was immediately hooked. There was no coincidence in my beginning to chant and receiving this call.

That night, I came home and began what I would coin, my rebirth. That was about a month and a half ago. Since that night, I have become bride of chanting and studying Nichiren Buddhism. My journey has been filled with moments of grief, happiness, anger, fear, hope and gratitude and I dare not look back.

Soon, I'll take the next step and accept my Gohonzon. Until then, I am happy to say that I've found a practice that is helping uncover what I know is embedded deep within: My True Self.
Posted by Chameleon Moon at 5:17 PM